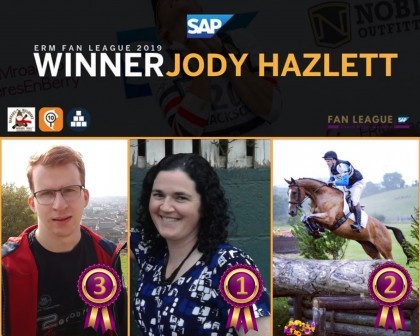 It was not only the Event Riders vying for great prizes during this year's Event Rider Masters Series. New for this year, the first ERM Fan League, developed with SAP, Spectator Judging App and Equiratings Stacks App gave ERM fans the chance to compete for top positions on the leader board and amazing prizes.
The 2019 Winner is Jody Hazlett from New Zealand who wins an all inclusive VIP trip to the German Stuttgart Masters Show. Jody has been a fan of ERM since it begun 4 years ago and used both the Spectator Judging App and the Equiratings Stacks App during every leg of the ERM 2019 Series. Jody told us that the only live action she missed was “the last half of the Chatsworth dressage as it was midnight in New Zealand and I didn’t think I had a chance of getting anywhere on the Fan League leader board so I went to bed. But then I was pleasantly surprised the following morning to discover I was in the top 10 and from then on I was really invested in the fan league!”

When Jody discovered the awesome winners prize on offer from SAP, this lead to many more sleepless nights to become our very own ERM Super-Fanatic; “I spent a lot of time making all sorts of lists and stats on the riders for each event to try and get the best Stacks score I could, and living in New Zealand meant I had to stay up till 3am sometimes to watch it live! (I would have stayed up to watch it anyway, I adore ERM, but the fan league really added an incentive!) I had a lot support from friends and family who I told about the competition and they kept asking how I was doing, which also hopefully introduced a few of them to Eventing.”

The VIP trip includes Jody’s flights, accommodation and a VIP guest experience at the Stuttgart German Masters Show where she will be rubbing shoulders with many of the ERM Star Riders; “I am so excited to have won this prize, I can’t wait to visit Stuttgart and watch the show, I’m sure it’ll be amazing. I’ve never been to Europe before, so my husband and I are adding a few extra days to a couple of other cities, so it’s doubly exciting!”

Jody certainly didn’t have the Fan League Competition all to herself, in fact Dario from Croatia who finished in 3rd place, actually lead the league for the entire 2019 series until the Lignieres en Berry finale , where strong performances from Jody and Jonathan Hagan at the final ERM Leg saw them both leapfrog Dario. Jonathan is an Event Rider himself who lives in Northern Ireland and has competed up to 4*Short in Eventing, so perhaps we will one day see him in the actual Event Rider Masters competition!

Dario is a student who has never ridden a horse, but tells us that he “loves the variety of skills that Eventing requires, from being able to control every step in dressage arena, to going all out across the country. I also appreciate the commentary and friendly atmosphere that ERM always delivers.” Converting Dario into Super-Fan status of ERM and the sport of Eventing is one of the very reasons why the Event Rider Masters series launched in 2016.

The Event Rider Masters team are very happy to be able to reward Jody, Jonathan and Dario for being ERM Super-Fans!