A Red-Hot Line-Up for Lignieres 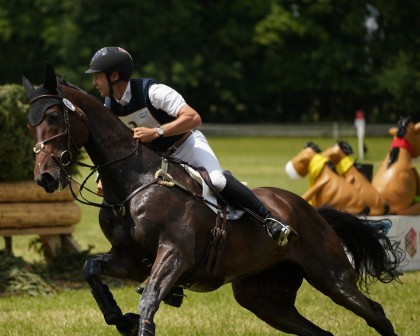 The series finale takes us to the heart of French eventing at Lignieres en Berry, where the door is wide open in the hunt for podium placings. And with over €100,000 on the line, nobody's coming to play.

Nestled in the Berry province in the Center-Val de Loire region, in France's most verdant countryside, Lignieres en Berry offers everything you've come to expect from the Event Riders Masters: a beautiful setting, a tough and influential cross-country course, and a host of familiar faces to battle it all out.

We're on the final countdown to the biggest stage of them all. But the first phase of the competition? Making it through #ERMtheCut, in which our field of entrants is whittled down to the final selection. The result? Twenty-five of the biggest stars in the sport of eventing. Twenty-five riders, and twenty-five horses, who are ready to give everything they've got for a chance to get on the most coveted podium of the series. Here's what to expect.

All three of our previous series champions come forward for the 2019 finale, as do ten previous leg winners - but there are six riders in particular who stand to take the top honours in this year's series.

Current series leader Chris Burton will be hoping to romp to a win on Quality Purdey, the fast and feisty mare with whom he made a podium appearance at Arville. But the Fastest Man in the World can't afford to leave any marks on the table - the home nation's surprise hero, Gireg Le Coz, is just five points behind him in the series rankings, and with his top horse, Jardy winner Aisprit de la Loge, he'll be a formidable force to be reckoned with.

It's never a two-horse race at the ERM finale, and this year is no different - just a solitary point behind Gireg sits Badminton and Luhmühlen winner Jonelle Price. After two top-ten finishes in ERM legs this season and a close second at Camphire's CCI4*-L, Grovine de Reve comes forward ready to produce the goods. Can the relatively new partnership overtake the established combinations ahead of them? We recommend never underestimating the Kiwi phenom - though she be but little, she is fierce, indeed.

Sarah Cohen and Treason are mainstays of the Event Rider Masters series , and they nabbed themselves second place on the 2017 podium - but with 63 points to their names this year, they'll need to put everything on the line to go one better. They're not the only long-time partnership hoping to make one final leap up the board, either - Alex Bragg and the evergreen Zagreb will be aiming to capitalise on the 50 points they've earned so far. A win here could turn the leaderboard as we know it on its head.

And let's not forget the 2017 series champion: Gemma Tattersall might not be at the top of this year's rankings, but with a very respectable 44 points under her belt, she and Jalapeno - a new partnership, but second in Bramham's tough CCI4*-L this summer – could just surprise us.

It's not just a battle between the series podium candidates, though, and the series finale will be just as ferociously campaigned by its outliers. Michael Jung and Star Connection FRH took Wiesbaden - but can they take Lignieres, too? Or can 2016 champion Oliver Townend make the most of his brand new partnership with the ultra-talented Alcatraz? Or will World Number One Tim Price take the top prize, riding his Luhmühlen winner Ascona M?

With the best riders in the world heading up a truly global eleven nation field, the competition is guaranteed to sizzle until its final seconds. Join us as we crown the 2019 Event Rider Masters series champion.

Once more unto the breach, eventing fans. Are you ready?