An owner's excitement builds for Jardy 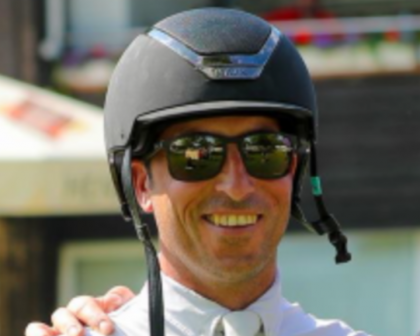 Sue Benson, London Olympics 2012 Cross Country course designer, has been in touch to share her excitement about her horse Falco's appearance at Leg 4 of the ERM Series at the Haras de Jardy in Paris this weekend.

"Falco is by the Grand Prix Holstein jumping sire Cardenio, who was, himself by the jumping stallion Coriano.I have owned him since he was a five-year-old, he's now ten. He did not start eventing seriously until his seventh year. Tim Price has brought him up from BE100 to advanced.

This will be Falco’s biggest test to date. He is the horse of a lifetime for me – I only wish I had owned him when I was riding. He has not always been straightforward as he is so careful, but he loves his eventing and he and Tim have a wonderful relationship.

My own eventing career was from the 70’s to the 90’s when I represented GB at three European championships, finished second at Badminton and third at Burghley amongst other things.

Tim currently sits 6th in the ERM series standings and will be seeking to strengthen his challenge for series podium honours with Falco in Paris.