Astier Nicolas rides on the crest of a wave 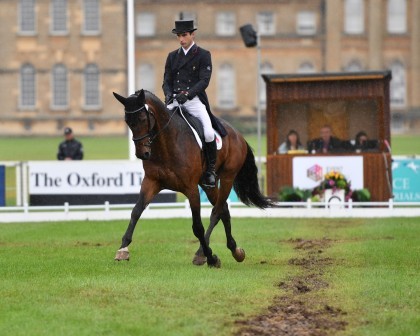 Current Olympic gold and silver medallist Astier Nicolas (FR) and Molakai performed a personal best dressage test to take the lead in the final leg of the Event Rider Masters with a score of 41.3 at the Blenheim Palace International Horse Trials today.

On a tough day of dressage for competitors in testing conditions following a day of consistent rain, no horse and rider combination achieved a sub 40 mark. However, Astier and Molakai performed a beautiful test to go into first place by the narrowest of margins. Hot on his heels in equal second is Jonelle Price (NZ) and Cloud Dancer and Thomas Carlile (FRA) riding Upsilon on 41.7 and Jock Paget (NZ) riding Clifton Signature on 41.9.

Astier, who also won the first leg of the ERM in May this year riding his Olympic medal winning horse Piaf D’ Bneville said:

“It’s was a personal best for Molakai today so I am very pleased with him. We gave him some physio this morning as he didn’t feel quite right yesterday and he really has improved for it.  The competition is really tight and previously the showjumping has been a bit of nemesis for us, but I will be aiming to beat our stats tomorrow and remain at the top”.

Less than eight marks, the equivilant of two poles down, separate the top twenty-three placings following the dressage.  With the influential showjumping and cross-country phases tomorrow and a total prize money pot of £50,000 up for grabs, the final leg of the Event Rider Masters is certainly set to go down to the wire.

Paul Tapner who has held the series lead for the last two legs said;

“I am really happy with Yogi today he performed a good test in tough conditions. I didn’t expect to lead after the dressage but if we can finish on our dressage mark we could have a good chance of winning the series title. The pressure certainly is on for tomorrow”.

The show jumping and cross country phases can be viewed LIVE and for free, from anywhere in the world, from 9.20am (BST) on Sunday 11th September at eventridermasters.tv