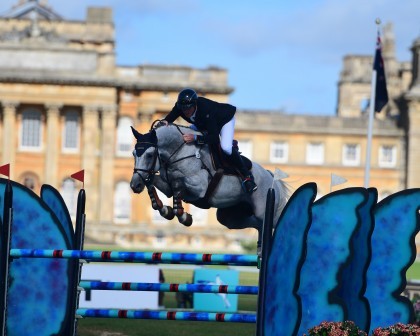 Frenchman Thomas Carlile and the grey stallion Upsilon have made the trip across the channel this weekend for their fourth ERM appearance at Leg 3 at the St. James's Place Barbury International Horse Trials.  This combination has secured podium finishes in all of their previous ERM starts, including a win in the sixth leg in the 2016 series.   Bar a mistake in the showjumping at Leg 1 earlier this year, they have proved very strong across all three phases, finishing in the top five in over 90% of their international starts.  Carlile and Upsilon are strongly fancied for another podium finish this weekend, if not the top spot.

Oliver Townend (GBR) arrives at Barbury yet to score 2017 series points.  However, Townend is an outstanding series performer, having won two ERM legs last year as well as being crowned the overall 2016 series champion.  His ride this weekend is Cooley Master Class who has been lightly campaigned at international level, but has won his last two CIC*** starts. No doubt Townend will be hungry to score valuable series points this weekend to maintain his ERM series crown.

Gemma Tattersall (GBR) partners Pamero 4, a ride she has recently acquired. Gemma became the first female rider to win a leg of the series at Chatsworth in May with Quick Look V. If Tattersall can deliver similar form to her previous ERM performances she could become the first competitor in the whole series to win multiple legs riding different horses.

Marcio George (BRA) currently sits in second on the 2017 ERM table with 37 points behind the series leader Sarah Cohen (GBR) on 51 points.   He holds the lowest ever dressage score at Barbury of 32.5, which he set last year with Lissy Mac Wayer.  This weekend Marcio rides Coronel MCJ, who makes his third consecutive appearance in the 2017 series, having finished ninth and eighth respectively in Legs 1 and 2.