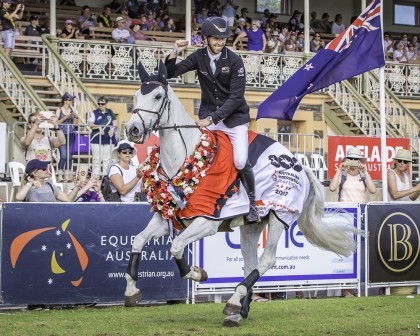 Stable name: Ritchie or The Snowman

The opportunity to see this combination compete on this side of the World is a very special one. They were the only combination from New Zealand to do the bulk of their Rio Olympic preparations in New Zealand itself and it is very rare that they compete over here. In fact they have just one previous competition visit to the Northern Hemisphere at the start of 2016 where they came 4th at Badminton.

6th individually at the Olympics in Rio and winning Adelaide 4* last Autumn, they come to Arville with four International victories in a row under their belts (the record is 6). They are using Arville as an important prep run leading up to the World Equestrian Games in September - will it be a winning one?