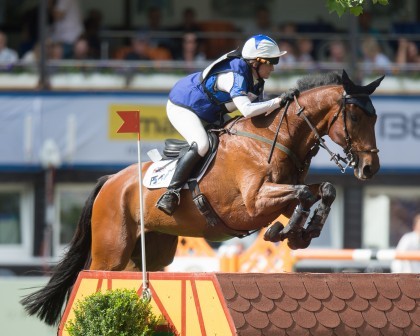 With the best four leg scores for each rider counting towards their overall series score, the battle for the final series placings is very much alive.  Sarah Cohen (GBR), Sir Mark Todd (NZL), Shane Rose (AUS), Marcio Carvalho Jorge (BRA), Tim Price (NZL), Oliver Townend (GBR) and Andrew Nicholson (NZL) are all in a position for podium finish if they produce a strong result this weekend.

Sarah Cohen is on 93 ERM points so far, having competed in five legs on her horse Treason, securing top ten finishes in all of them, including winning Leg 2 at Wiesbaden, Germany. This puts Cohen in second place on the series leaderboard, and she is guaranteed to finish no lower than third this weekend.

A place on the podium eluded Sir Mark Todd (NZL) in the 2016 series, however the former double Olympic champion put his ERM demons firmly behind him this year.  He currently sits in third on the ERM leader board on 69 points, with three top ten ERM performances including finishing in third place at Leg 3. He is the only competitor who can challenge Sarah Cohen for second in the overall series, and rides Kiltubrid Rhapsody for the fourth time in 2017 this weekend, who he finished in fourth place with at Leg 5.

Leading the challengers for Sir Mark’s third place in the series is Shane Rose who secured the first win for Australia at Leg 6 riding Virgil. Rose sits in fourth on the leaderboard on 58 points and this weekend partners his 2016 Olympic horse CP Qualified.