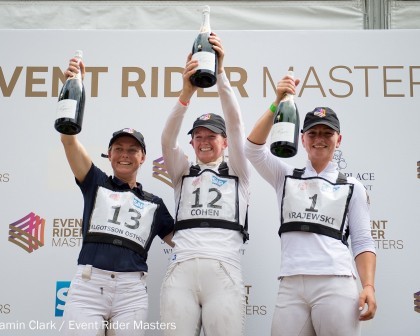 Britain’s Sarah Cohen celebrated her first Event Rider Masters win on an all-female podium today at Leg 2 of the series at Internationales Wiesbadener PfingstTurnier in Germany.

Following a brilliant and quick cross country riding Treason, Sarah scoped the 19,000 Euro (£16,000) first prize.  The combination were always hot on the heels of the leaders across the two days and climbed from fifth to third after the showjumping.  Posting the quickest cross country, with just 3.6 time penalties, as well as being one of only two double clear’s in the competition Cohen and Treason finished on 46.8, securing the second British win in the 2017 series.

Sarah who now leads the series with 51 points said:

“At the beginning of the year I wanted to give the series a go.  We had a good time at Leg 1, so I decided to come to Wiesbaden.  I wanted to be competitive but never thought I would win!  I knew Treason was fit and he just wanted to gallop and jump today. I am over the moon with him".

Ingrid Klimke, who looked confident in the final stages of the cross country, left the home crowd in dismay as SAP Escada FRH glanced off the second last fence.  The mistake plummeted them down the leader board and cost the combination the top spot on the ERM podium.

Julia Krajewski (GER) made a remarkable recovery following a costly showjumping round to climb back up the leader board to secure second place with Chipmunk FRH finishing on 54.2.  Sweden’s Sara Algotsson Osholt riding Reality 39 took third place on the podium completing on a score of 55.8.

For full results and to watch the action again click here.