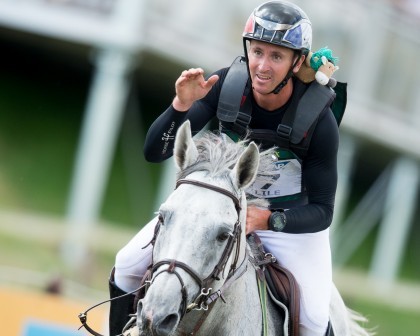 Riding the nine year old stallion Upsilon, Carlile became the first rider in the series to lead a ERM leg across all three Eventing phases. On Day 1, they delivered a stunning dressage test, scoring a remarkable mark of 30.8 -  the lowest ever seen across the entire series and a personal best for the combination.  Then, following a faultless showjumping performance on Day 2, the combination set the Barbury crowd alight with a superlative jumping round on the cross country. Thomas added just 1.6 time penalties to his dressage score and scooped the £16,000 first prize. The result was an all-time record finishing score in the ERM series of 32.4.

“All my words go to Upsilon, he is superb” said Carlile reflecting on his outstanding ERM win. “I just sit on him and let him get on with his business and he has risen to the occasion this weekend.  He’s a class act and is certainly on form and hopefully there is a still lot more to come from him”.

Carlile also joins 2016 ERM champion Oliver Townend (GBR) as the only rider in the entire series to have topped the podium twice.  His Barbury win positions Carlile at the top of the overall 2017 ERM series scoreboard with 56 points.  Sarah Cohen (GB) is in second with 51 points and Andrew Nicholson (NZL) is lying third with 50 points.