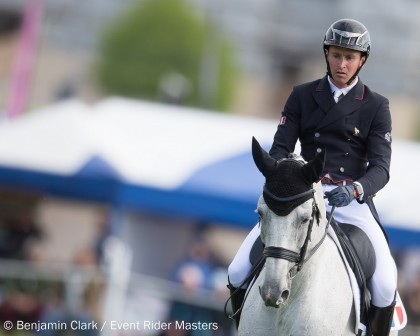 France lead the way after a fascinating day of dressage at Leg 1 of the 2017 Event Rider Masters (ERM) series at the Dodson & Horrell Chatsworth International Horse Trials.

Thomas Carlile and the grey stallion Upsilon performed an exceptional dressage test scoring 33.2, taking the lead with the third best ever ERM mark. Following a strong series in 2016, the combination sent out a warning shot of their intent to win the 2017 ERM series.

“Upsilon is such a wonderful horse and has so much ability. We’ve really worked on strengthening him up for this phase and he certainly delivered today. Looking to tomorrow, I believe he will only have a pole down in the showjumping if I make a mistake. It would be nice to have a bit of breathing space going out on the cross-country, but with Gemma and plenty of others breathing down our neck I doubt we’ll have such a luxury!”.

Day 2 looks set to be an exciting one so tune in from 10:15 (BST) to see all the jumping action unfold LIVE and for free!