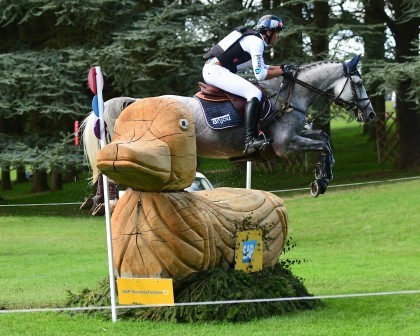 What a finish to the series of the Event Rider Masters!

The time across the country proved tight and David Evans’ beautifully presented track caused plenty of evenly spread problems. Running in reverse order the tension built and the pressure increased with not only the Finale win but the Series win on the line!

Paul Tapner laid down his series challenge by being the first combination inside the time to climb from 20th after show jumping to an eventual 8th with his trusty companion, Yogi Bear.  Beanie Sturgis followed soon after on the small but super speedy Lebowski.  They came through the flags spot on the optimum time of 6 minutes 38 seconds to finish in 6th and went on to be the only combination to complete on their dressage score.

The pressure continued to build and Gemma Tattersall fell foul of the Brush Corners at 13 for an expensive 20 penalties and she later retired taking her out of contention.  Jonelle Price steered Cloud Dancer II round with just 0.4 time faults to finish on the podium for the second time this series in eventual 3rd place.  Oliver Townend, the winner of legs 4 & 5 at Gatcombe & Blair with Cillnabradden Evo, once again put in an incredible performance picking up just 0.8 time penalties to secure 2nd place for his thrid podium finish in a row.

The tension told on others in contention.  Karin Donckers picked up time penalties and both Franky Reid-Warrilow and Aoife Clark ran into problems at the Brush Corners.

The last out on course was Thomas Carlile with the talented 8 year old stallion Upsilon.  He could afford to be 11 seconds over the optimum time and still take the win and the pair did it in style, cruising round to finish 2.4 penalties ahead of the rest of the field to claim top spot on the podium and the £16,000 first prize.

"This horse is amazing and he is only eight years old!" said Carlile following his win.

"He has done a lot this year for his age, so the plan is to for him to have a holiday followed by some winter stud duties, then I expect I will target him at this series again next year, rather than a big three day event.  I wish I had got involved in the series earlier in the year.  Since our ERM debut in leg four it has given me, and importantly my owner’s, something tangible to target and it helps us as competitors to be more commercial to potential sponsors as the exposure and profile surrounding the series is very good."

The drama & excitement expected of the Series Finale did not disappoint and if you missed any of the action then dont forget you can 'Watch Again' at www.eventridermasters.tv.