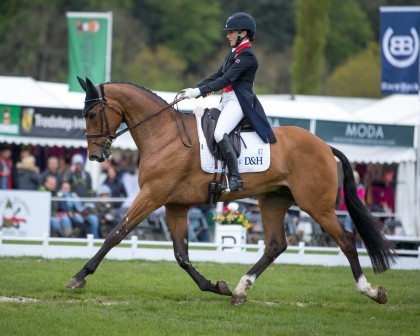 Chatsworth: Leg One, Day One.
Laura Collett leads with the formidable London 52 - but with less than a single pole between the top seven, nothing is set in stone.

Thirty horses and riders came forward today to contest the first phase of competition at the Dodson & Horrell Chatsworth International Horse Trials. A game of accuracy, communication, and harmony, the dressage phase sets the pace before the thrills and spills of the jumping phases to come.

But today, it wasn't going to be an easy job. Heavy rain had led to tricky, muddy conditions, and the assembled competitors were going to have to bring their 'A' game - as morning leader and EquiRatings analyst Sam Watson says, ground like this "exploits [the horses'] vulnerabilities". With no margin for error - and no chance of sneaking extra points for flashy movement - the battlefield was ready to separate the good from the truly great.

One woman with an innate ability to produce the goods in this phase is the young British superstar Laura Collett. As last year's ERM series runner-up, she comes into the 2019 season hungry to go one better - and today, she got that mission off to a decisive start. Riding her exceptional Blenheim CCI4*-S winner London 52, Laura produced a copybook test to rocket to the top of the leaderboard in the afternoon's final session.

"He was super; he’s still so shy, and in an atmosphere like that, he does get a little bit tense," says Laura, who delivered an unsurpassable score of 26.9. "But he stayed with me, event though he was pretty scared going up the centreline the first time when he saw the camera tower. Every time we went down that end he froze a little bit, but at least he didn’t do anything too drastic!"

German phenomenon Julia Krajewski is well-known for her prowess between the boards, and she didn't disappoint. Riding the inexperienced Amande de b'Neville, she produced a 27.4 to sit in a close second place overnight.

"I’m very happy – Mandy, as we call her, definitely had her first experience in a big atmosphere in there," she says. "But she didn’t seem to mind – she was very focused, very concentrated, and minding her feet, because it was very muddy in there! She was like, ‘this is dressage?! Okay…!’"

Of her ordinarily unassailable skills in this phase, she says, "I try to see it more like working with the horse and developing the horse, rather than thinking, ‘now I do dressage.’ It’s all about doing it together. It’s about harmony and being with the horse – not so much about showing off or having huge gaits. But I really enjoy it!"

Australia's Bill Levett is a familiar face in the ERM series, and he holds onto third place - and a podium position - overnight. He and the stalwart Shannondale Titan posted a 28.5, leaving them just 1.6 points, or four seconds across the country, behind our leaders.

"He was really with me, and allowing me to ride him with bravery, so I'm very pleased," says Bill. "Yesterday, I was feeling very apprehensive about the whole thing; coming in here seems to light them up, but today we got the work right and he was with me most of the time."

Olympic veterans and former Chatsworth ERM winners Gemma Tattersall and Quicklook V hold fourth place overnight with a score of 28.7. Just a penalty point behind them in fifth sit fellow ERM leg winners Sarah Cohen and Treason. With ERM - and course - form, these pairs should be formidable.

For the full leaderboard, click here. Watch the highlights of day one here.

Tomorrow's competition begins with a tough showjumping track designed by Di Boddy. With less than a rail separating the top seven after dressage, a clear round over the poles will be crucial - but Di hasn't made it easy. Our riders will need to ride tactically over well-calculated lines, and they'll need to think about the time, too. Our overnight leaders, Laura Collett and London 52, haven't had a rail since last summer, while second-placed Julia Krajewski's Amande de b'Neville has never knocked a pole at this level.

"But," says Julia, "she's not used to jumping on grass that's very wet, so we'll see if she realises she needs to jump a little bit higher."

While the showjumping phase offers plenty of opportunity for our leaderboard to change, it's the final phase that will be the most influential. Cross-country at Chatsworth is no fool's game. With its colossal hills and tough, technical questions, it creates a serious question of speed. Can our clubhouse leaders put the pedal to the metal and stay up on the clock? Or will the day's torrents slow them down as they tackle the terrain? And can the fastest man in the world, Chris Burton, make up the 9.6 penalty margin to take the lead with Lawtown Chloe?

The average time penalties accrued across the country at the ERM's Chatsworth leg is 11.7 - that's 1.1 penalties more than the margin between our current leaders and Cathal Daniels, who sits in 28th place overnight.

Want to take a deeper dive into the world of ERM? Make sure you download EquiRatings Stacks, the high-stakes prediction game that can win you an iPad. Want to get ahead of the competition? Head over to the Prediction Centre to see how your favourites stack up against the competition. Then, jump into the SAP Spectator Judging app to see how you fare against our experienced panel of judges.