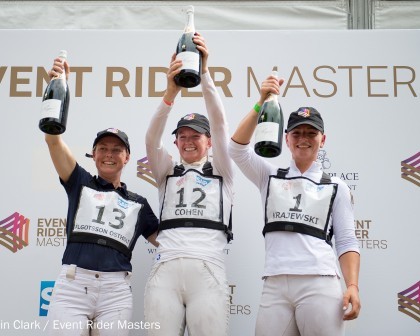 The spectacular setting of Blair Castle in Scotland will play host to the sixth and penultimate leg of the 2017 Event Rider Masters (ERM) series at the Blair Castle Equi-Trek International Horse Trials on the 26th and 27th August.

Gemma Tattersall (GBR) heads the overall series standings with 104 points, with Sarah Cohen (GBR) in second with 91 points.   Tattersall has been an impressive performer in the 2017 series, having won the first and fifth legs riding different horses, as well as finishing in the top ten at Legs 3 and 4.  This weekend she teams up with Pamero 4, who she rode at Leg 3 into seventh place.  She arrives at Blair Castle fresh from delivering a top ten finish at the European Championships last weekend when riding as an individual representing Team GB.  Tattersall, who stated from the outset of the 2017 ERM series that her intention was to win it, is the rider that her fellow competitors will need to catch this weekend.

Sarah Cohen (GBR) is in striking distance to close the gap on Tattersall at Leg 6, with just 13 points between them.  Another prolific competitor in the series this year she has ridden her fifteen-year-old gelding Treason in four ERM legs.  The pair were the decisive winners at Leg 2 in Germany and have delivered impressive top ten completions in their three other ERM starts.   If the combination can deliver another podium finish this weekend, Cohen will be in a strong position to challenge for the top spot in the series.