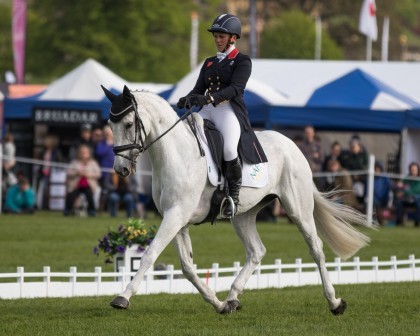 Welcome to the Chatsworth Draw.

Who leads the charge? Who sets the pace? And who has the power to change everything?

This weekend, we're heading to the Dodson & Horrell Chatsworth International Horse Trials, where Leg One of the 2019 Event Rider Masters series begins with a bang. Thirty horses and riders have made it through The Cut - now, it's time to find out who has to face the judges first. Join us for the Chatsworth Draw.

Horse and rider combinations are seeded into three groups based on prior performance - there's the A team, which features the world-beaters, the household names, and the medal-winners. Then there's the B team, a formidable group of up-and-comers who are proving themselves on the world stage, with impressive results. Finally, there's the C team - and they're hungry for the top spots.

Once they're through the initial seeding process, our competitors numbers are randomly drawn by ERM presenter Nicole Brown. The draw determines the order in which they'll enter the ring - will they have the tough task of trying to impress the judges early on? Will they go straight after an Event Rider Masters champion? Or will they close out the day's competitions, leaving an impression on the scoreboard and the spectators, for better or for worse?

Leg One of the 2019 Event Rider Masters series will begin on Saturday, the 11th of May, at the Dodson and Horrell Chatsworth International Horse Trials. The competition will begin with Saturday's dressage phase, which will be broadcast from 11.00 a.m. to 5.00 p.m. BST.

The day's final session is red-hot and jam-packed with potential leaders. Laura Collett and London 52 have been on the form of their lives this spring, and can never be discounted in the dressage arena, while fellow Brit Gemma Tattersall brings forward a big gun in the form of her Rio Olympics mount, Quicklook V. Germany's Julia Krajewski has earned herself a reputation for being unbeatable in the first phase, but can she continue her lucky streak with Amande de b'Neville? Or will we see Pippa Funnell's dressage superstar MGH Grafton Street deliver a personal best and leave the competition in the dust?