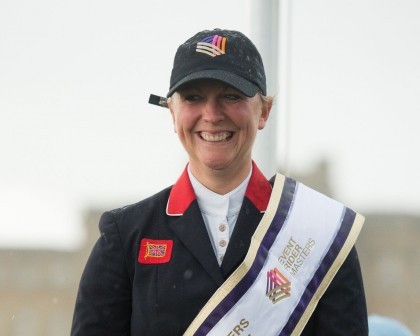 The Event Rider Masters Series (ERM) confirms its’ 2018 calendar of six legs, which builds on the International expansion into mainland Europe, with the introduction of a new leg in Belgium.

The 2018 Event Rider Masters calendar is confirmed as:

The 2018 ERM venues located in Belgium, England, France, Germany and Scotland are all renowned for hosting some of the most prestigious and spectacular Eventing competition in the world. The continued expansion into mainland Europe reinforces the intention of ERM to feature on other continents in the future, with the goal of establishing it as a recognised global sporting series and entertainment platform.

Broadcast coverage of each leg of the ERM is supported by pioneering technological innovations which, prior to ERM, have not been seen before in television coverage of Eventing. Features include live competition data, presented via enhanced TV graphics designed to further engage the viewer.

ERM is one of the pioneers of full live content viewing by making the sport available, for free, on innovative popular social media platforms Facebook Live and YouTube. It is also available to view live and for free by anyone in the world on www.eventridermasters.tv

ERM will continue to innovate and expand the coverage of Eventing to the wider sporting audience by incorporating cutting edge technology, presentation and editing. ERM is very proud to have Official Technology Sponsor, SAP, working alongside the team to develop even more innovation and audience engagement technologies.

The balance of male and female wins from the ERM athletes highlights the sport of Eventing as a sport of true gender equality and reinforces the Olympic ideal.

2017 Season ERM Champion, Gemma Tattersall commented:
“I enjoyed the pressure of the 2017 series and cannot wait to set my season around the 2018 series with my team of horses. The new event at Arville will be a challenge and the even mix between UK and Europe will definitely increase the International competition within the series. I cannot wait!”

Chris Stone, CEO of Event Rider Masters commented:
“The 2018 series marks an exciting progression for Event Rider Masters. Not only are we building on the Eventing showcase the series has developed, but we are planning to introduce even more technology with SAP to push the boundaries of our sports’ presentation.

The expansion into mainland Europe with the addition of Arville embraces the truly global nature of Eventing and will definitely make the competition more intense. It is a privilege to introduce ERM to the Belgian Eventing audience.

With the 2018 FEI World Equestrian Games in Tryon in September we are expecting to see International Eventing superstars and their teams using the competitive ERM series as part of their build up.

I would like to take this opportunity to thank the countless volunteers, officials, owners, fans, grooms, athletes, venues and the ERM team who make the series possible. 2018 is going to be a very exciting year and we cannot wait for the series to begin at Chatsworth.”

“We are thrilled to become a part of the ERM series and host the first Belgian ERM Leg. Eventing in Belgium is a growing sport and we are excited to bring this great series together with ERM to the Belgian fans”

“ERM is a great way to demonstrate SAP’s approach to sports sponsorship. The innovations we are creating with ERM are an exciting way to bring fans and media closer to the sport and showcase the power of SAP technology. We are looking forward to another inspiring year as Official Technology Sponsor to ERM in 2018”

For more information on this press release contact, press@eventridermasters.tv

Every minute of every ERM competition live streamed online

Up to 40 riders compete in each leg.

Eligible competitors accepted into each leg are announced on ERM Social Media platforms in “The ERM Cut”. Riders are selected based on their FEI World Rider Ranking at the time of entry to each leg.

Event Rider Masters has innovated the live online broadcast of the dressage starting order draw, in line with the unique seeding of the ERM Dressage phase according to the competitors’ horses average Dressage score.

Riders perform their Dressage routines to their own choice of music to enhance the spectator experience.

Live movement by movement Dressage scoring is available for spectators both on- line and on site.

SAP provide a Spectator Judging App for the Dressage phase, to allow spectators to act as a dressage judge and compare their opinion to that of the official Dressage judges.

The Show Jumping is run in reverse order of merit from the Dressage results.

The top 20 riders after the first two phases of Dressage and Show Jumping, start the Cross Country in reverse order of merit – ensuring that the tension builds till the very last rider is on course.

Unique rolling ERM Podium at the Cross Country finish, with live big screen TV and ERM Fan Zone creating an exciting atmosphere that builds towards the final result of each leg.