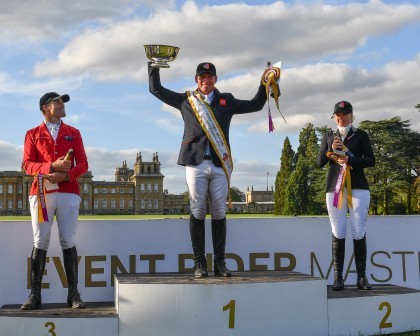 With all four of the Series contenders tightly bunched after the Dressage at Blenheim Palace and a further £50,000 up for grabs, the scene was set for a climatic finish in the jumping phases.

Paul Tapner’s expensive 9 faults in the Show Jumping with Yogi Bear meant that he dropped to 20th going into the final phase and even a clear round inside the time could not move him into a position to improve on his 93 series points, so the title was there to be taken.

A clear round in the Show Jumping from Oliver Townend meant that he went into the Cross Country as the favourite, although with time across the country proving influential and with the other contenders, Jonelle Price and Gemma Tattersall, still in the top 10 it was going to be a close finish.

There was heartache for Gemma Tattersall as the hugely talented Chico Bella P had an uncharacteristic run out at the Brush Corners (fence 13) on the cross country, which took her out of Series contention.

This left fierce competitors Jonelle Price and Oliver Townend to battle it out for the £30,000 first prize.  Price was on course first and she piled the pressure on Townend with a fast clear, adding just 0.4 time penalties to take over the clubhouse lead.  This meant that Townend had to jump clear and in a fast time to secure the Series win.  But always a cool customer under pressure Oliver headed out round David Evans' track looking focussed and Cillnabradden Evo didnt let him down.  The pair completed with just 0.8 time penalties, securing second place on the podium, which in turn left Townend with a total of 100 series points to clinch the win, five points clear of Price (95) in second and Tapner (93) two points behind in third.

“To win any leg in the ERM you need an exceptional horse – who is a good mover and jumper, has a great brain and is quick and I feel Cillnabradden Evo has proved he is perfectly suited to this series. I am very proud of him.  I was a slow starter in the series earlier in the season as I was chasing the Olympic dream and next year I intend to compete in as many legs of the series as I can and aim to retain my title. For me ERM is the competition of the future and I am so pleased to have been a part of it from its outset”.