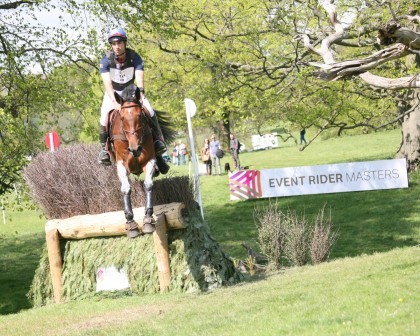 France dominated the podium placings in the first leg Event Riders Masters at the Dodson & Horrell Chatsworth International Horse Trials.  Forty riders, from nine nations were competing for a prize fund of £50,000 as well as an opportunity to catch the team selector’s eye ahead of the 2016 Olympics. Astier Nicholas riding Piaf De Bneville landed the £16,000 first prize.  He was joined on the ERM podium by French riders Thibaut Vallette and Karim Laghouag who finished in second and third place, riding Qing Du Briot and Entebbe De Hus respectively.  The fifth finisher, France’s Mathieu Lemoine riding Bart L, was also involved in the winning celebrations as he is a shareholder in Astier’s winning horse. Following the dressage and Show-jumping, Great Britain’s Kitty King held a commanding lead, but an incident leaving the start box of the cross-country cost her expensive time faults moving her right down the final order. After a faultless show jumping Marlborough based Astier started out on cross-country in second and wasting no time with Piad De Bneville the pair secured the lead after crossing the finish line with just 6.8 time penalties.   Astier explained; “It’s amazing to win the first leg of ERM and I am delighted for my horse Piaf De Bneville.  His show jumping and cross-country was spot on today.   It’s hard to make the time here at Chatsworth so I expected that the winner would need to post a quick cross-country and the final leader board could change dramatically.  This new competition format means you ride it more like a three-day-event rather than a one-day and the crowds getting behind the riders has created a really big atmosphere across all three phases.   The big aim for this horse is the Olympics this summer in Rio and this weekend’s competition has been an excellent preparation for that”. Four former European champions headed a stellar line up in the first leg of the ERM.  It produced a thrilling competition with dramatic surges up the leader board as the cross-country time, in usual Chatsworth fashion, proved hugely influential. Australia’s Chris Burton climbed from twenty second after show jumping, to finish in sixth place. He was the only ERM competitor to finish inside the optimum time.  Alice Fox-Pitt, a Director of ERM commented; “What an incredible weekend of sport.  The riders have delivered, the horses raised their game and the engagement with ERM across all platforms has been astounding. We can’t believe how strong the French challenge was, they have certainly sent out a warning shot to other nations ahead of Rio this summer.  What a venue Chatsworth is to showcase elite athletes at their best. Roll on leg 2 of ERM at Bramham”.  The second leg of the ERM is at the Equi-Trek Bramham International Horse Trials on 10th and 11th June.