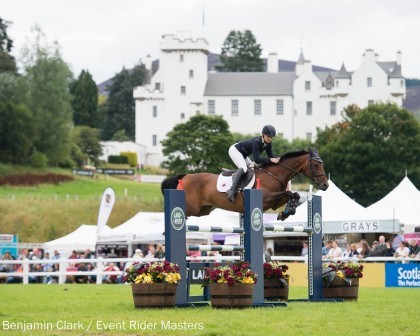 Britain’s Franky Reid-Warrilow will start out on the cross country phase in first place at Leg 6 of the Event Rider Masters at the Blair Castle Equi-Trek International Horse Trials.

Following a very influential showjumping phase the leaderboard was massively shaken up, with only seven competitors jumping clear rounds inside the time. Franky riding Dolley Whisper jumped clear remaining on her dressage score of 40.4.   The performance moved them up the order from fifth after dressage to first place.

In second place after showjumping is the overall ERM series leader Gemma Tattersall (GBR) and Pamero 4.  The combination jumped clear remaining on their overnight score of 42.5.  Australia’s Shane Rose riding Virgil moved up the order from ninth to third after also jumping clear and stays on his dressage score of 43.1.

The top three riders after dressage all incurred eight or more showjumping penalties.  This resulted with the overnight leader Niklas Bschorer and Tom Tom Go 3 dropping to eighth and will start the cross country on 48 penalties.  Sir Mark Todd, the overnight second, was left disappointed with Kiltubrid Rhapsody after he knocked down several rails, dropping them to sixteenth place on a score of 52.7.  Chris Burton, moved down the order from third to sixth after knocking down two rails and sits on a score of 46.9.

With the terrain of the Scottish Highlands providing a true stamina test on the cross country, the scene is set for a fascinating afternoon of ERM eventing.   For full leaderboard for Leg 6 and live score click here.