History made at Leg 2 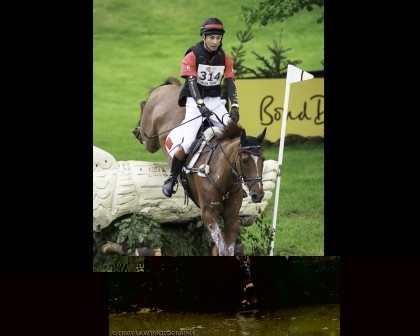 Leg 2 of the Event Rider Masters saw China’s Alex Hua Tian, riding Don Geniro, make history by becoming the first Chinese equestrian to win at three-star level at the Equi-Trek Bramham International Horse Trials.  Alex, who finished in last place in the first competition of the series at the Dodson & Horrell Chatsworth International Horse Trials reversed the form by winning Leg 2 following faultless show-jumping and cross-country rounds to finish on their dressage mark of 40.1 and scoop the £16,000 first prize. Alex told the ERM team; “I can’t believe it, we were dead last at Chatsworth and to be here and win is extraordinary. ‘Don’ is an exceptional horse and this win is a huge credit to all of my team. This is my first three-star international success on British soil and I think a first for China and to represent my country in such an international field is amazing. I believe Eventing is experiencing a renaissance, the level of competition amongst all the competitors in this Olympic year is incredible and the addition of the Event Rider Masters series is something really special for the sport and I am very proud to be a part of it”. Finishing in second place was America’s Clark Montgomery and Loughan Glen.  The pair were tipped as the favourites entering the competition and led after the dressage on a score of 36.5.  However, a rail in the show jumping proved costly, meaning they set out on the cross-country in second place with a score of 40.5 and despite the pair performing a quick and clear round, remaining on top of the podium was impossible after Alex completed with no penalties.  Nevertheless, it was an eye-catching performance for the American selectors, who are expected to name their Olympic team shortly.  Clarke commented; “It’s been great fun being part of Event Rider Masters this weekend, I've really noticed the support back in the states via the live stream and on social media. I am delighted with ‘Glen’, I set out on the cross-country at a safe but good gallop and I’m really pleased his fitness stood up, he’s a real runner and he kept up a great pace”.  Third place was filled by the Kiwi glamour girl dubbed the fastest woman in the World, Jonelle Price, who gave the New Zealand team selectors a further Olympic team conundrum with her podium finish on Faerie Dianimo. The lovely grey mare was foot perfect in both the ERM showjumping and cross-country to finish on their dressage mark to claim the final spot on the podium.  Following the champagne spraying, Jonelle commented; “This mare has been a little short on work, as I have been away six weeks on the trot competing at three day-events, so I am thrilled with her this weekend.  This was a good platform to prepare ‘Maggie May’ for Rio, I am very lucky as she is one of two of my rides that could be an Olympic hope, Classic Moet being the other, however, I would probably favour this one for the games, but we’ll see what happens.  It’s likely I will probably aim Classic Moet at Leg 3 of the ERM series at Barbury in July”. The best of the British riders was Rosalind Canter riding Allstar B, who finished in fifth place completing on their dressage of 43.3.  Pippa Funnel and Mirage D’Elle completed in seventh on 44.9 adding a time penalty in the show jumping and a further 1.6 time penalties on the cross country to their dressage score of 42.3 and Laura Collett and the reigning 7yo World Champion Mr Bass finished in eighth place adding nothing to their dressage of 47.4. Astier Nicolas, winner of Leg 1 of the series at Chatsworth, finished in 10th place riding Molakai on a score of 48.6.   After two legs the ERM leader board is already a closely fought affair with Astier leading on 47 points. However, following Clark's second this weekend and having finished in ninth at Chatsworth, the American is breathing down the French-man's neck in second, just one point behind on 46. If you missed this weekend’s action you can ‘watch again’ via the ERM website www.eventridermasters.tv. The next leg of the Event Rider Masters is at the St James’s Place Barbury International Horse Trials Saturday 9th and Sunday 10th July.