Jung is the master of modern Eventing at Leg 4 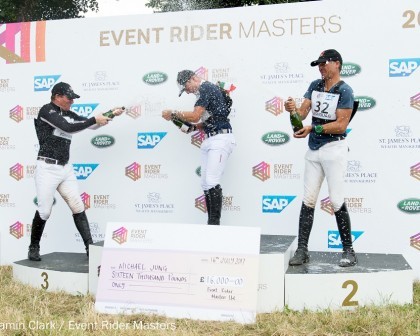 Michael Jung, the current European, Olympic champion and FEI world number 1 added another prestigious title to his CV by securing the top spot on the ERM podium at Leg 4 of the Event Rider Masters at Haras de Jardy.

Riding the exciting nine-year old Star Connection, Jung produced a precision timed piece of cross country riding, adding just 2.8 time penalties to his combined dressage and showjumping mark to finish on 38.5.  The win for Jung was by the narrowest of margins, with 0.4 penalties separating the Jung and the second rider home, Frenchman Karim Florent Laghouag, who completed on a score of 38.9.

“Star Connection is not the most experienced horse at this level. But he answered all the questions out there today and was brilliant.

“ERM is a super series for our sport, as it’s expensive to compete at Eventing.  In addition to the very good prize money the series also creates very good competition conditions and makes us as riders compete even harder.  I am very grateful for the opportunity this weekend and hope to target other legs in the future”.