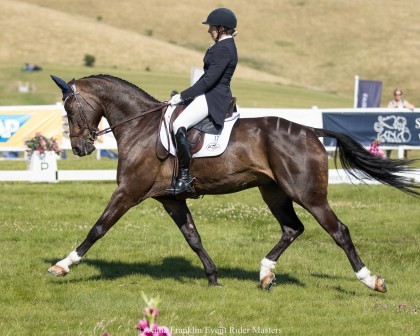 Having never seen a joint leader in an ERM Leg, today was to be the day with both Liz Halliday-Sharpe and Thomas Carlile tying in 1stplace going into the Show Jumping tomorrow morning on a score of 24.9.

The USA’s Liz Halliday-Sharp scored one of the few 9s that were awarded during the day with her long-time partner Fernhill By Night. Helping them on their way to take the lead from Nicola Wilson and at the same time smash their previous best Barbury dressage score by 10.4 marks.

With the best dressage average in the field coming into this Leg, France’s Tom Carlile and his Stallion Upsilon produced a super test with just one mistake in the counter canter putting the pair in joint place on the top spot overnight with Liz.

Holding 3rd place overnight, world number one Oliver Townend and Sally-Anne Eggington’s Cillnabradden Evo headed down the centreline as the final combination of the day. Producing yet another consistently correct test the combination proved they are an example of practicing until you don’t get it right but until you never get it wrong.

With joint leaders making the show jumping all the more influential and a very strong trend within the ERM being that a fault free round over the coloured poles must be achieved to be in with a chance of winning, tomorrow looks set to be an exciting day of Eventing.
Cillnabradden Evo is on a run of 15 clear Show Jumping rounds and 11 of those having been in a row with Oliver, the pair have never knocked an international pole at any level – could this be their 3rd ERM win together?

Thomas Carlile, Oliver Townend and Gemma Tattersall, the three riders in with a chance of being the first to take three individual leg wins all sit within the top 6 – can Gemma buck the Barbury trend and come from outside the top 5 after dressage to take the win?

Series Leader Laura Collett and inexperienced 3* horse Dacapo sit in 10th after the 1st phase – if they can collect some strong Series points tomorrow it will be tough for anyone to knock her off the top spot. Although with Chris Burton snapping at their heals, we doubt they will be resting on their laurels in the jumping phases.