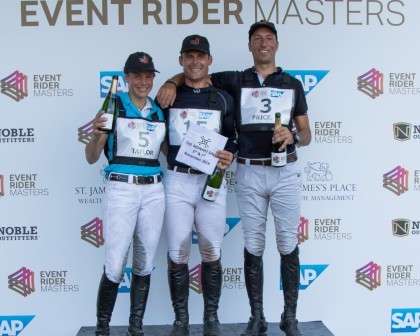 The achievability of the Jardy CIC3* Cross Country time changes year on year. According to the stats up to 26% of the field have made the time every second year with 0% the rest. This year was set to see the latter but the strength of the ERM field bucked that trend with 8 finishing inside the time.

In an afternoon that saw two of the best Cross Country riders in the world having Sat Nav problems and a fairy tale finish for Tim Price, the jumping proved just as significant as the time here at Jardy.

Leading from the off, British favourites Alex Bragg (GBR) and Zagreb needed a huge personal best in the Dressage, a foot perfect clear in the Show Jumping and a fast, classy clear inside the time across the country – all of which they delivered to take the penultimate Leg  of the 2018 Series.

“I am over the moon. I was riding a bit like a demon out there, I really, really wanted it. I can’t believe I was faster than Izzy and Gemma, they are absolute speed queens. Tim is a bit more laid back so I expected to be speedier than him!” Alex commented.

Looking like they’d never been away, the fairy tale continued for Tim Price (NZL) and his returning “best friend” Wesko, who delivered a Cross Country masterclass out on Pierre Michelet’s tough 3* track. Taking 2nd place on the Leg 5 Podium means Tim moves up to 3rd on the all important 2018 Series leader board.

Speaking about his 2ndplace finish Tim commented, “I’ll take that!  I was saying to Billy (Levett) I don’t think I’ve had another one like him, it’s so much fun having him back. You don’t know until you know when you bring a horse like him back out at the top levels, but I guess now I know. It all came flooding back out there – he is just so much fun.”

Finishing just 2 seconds over the time after a slight navigation error out on course, Izzy Taylor (GBR) and Be Touchable lived up to their reputation with a classy, fast clear to claim 3rdon the Leg 5 Podium. Gemma Tattersall (GBR) and Chico Bella P couldn’t quite break their run of 4thplace finishes in the ERM today when they ended their clear Cross Country round 3 seconds inside the time.

The fastest event rider in the world, Chris Burton (AUS), didn’t disappoint out on course, this time piloting Kate Walls’ 10 year old gelding Cooley Lands. Delivering an incredible clear 9 seconds inside the time despite an identical problem to Izzy Taylor’s, the Australian keeps hold of the top of the Series leader board going into the Finale at Blair Castle in Scotland.

WATCH all of the LEG 5 action AGAIN on http://www.eventridermasters.tv/