Leg One, Chatsworth: The Cut 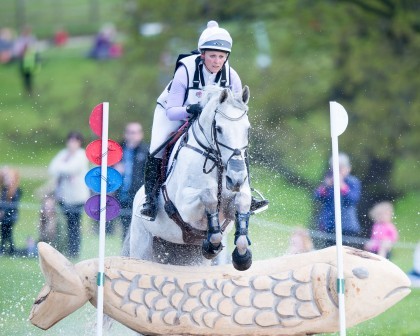 Welcome to 2019. The Event Rider Masters is back, and it's better than ever.

Join us on the 11th and 12th of May for the first leg of this season’s series: we’re heading back to the Dodson & Horrell Chatsworth International Horse Trials, where the times are tight, the fences are formidable, and the world’s best riders are prepared to fight for leaderboard gains and glory.

Chatsworth House is a setting as timeless as the sport itself: for centuries, it has been the seat of Dukes, Duchesses and, in more recent history, sporting champions. It may be one of the most beautiful and exclusive locations in England, but Chatsworth means business - only a handful of competitors have ever made the time across its infamous cross-country track. Prepare for an incomparable leaderboard shake-up.

The stage is set for an epic showdown of guts and gumption. But the first phase of the competition? Making it through #ERMtheCut, in which our field of entrants is whittled down to the final thirty. Thirty of the biggest stars in the sport of eventing. Thirty riders, and thirty horses, who are determined to put on a show you'll never forget. Here's what to expect...

Featuring eight of the world’s top 20 event riders, and spanning nine different nationalities, the Chatsworth line-up is a veritable who’s-who of eventing talent. The hot class of thirty includes two of our previous series winners, the Event Rider Masters themselves: 2016 victor and World Number One Oliver Townend dons the premiere tabard aboard Ulises, while 2017 winner Gemma Tattersall follows him into battle as number three aboard her Rio Olympics mount Quicklook V. 2018 saw the title head to one of the Southern Hemisphere’s finest, and Aussie Chris Burton will be looking to hang onto it for another year. The fastest man in the world will be riding his exciting new horse Lawtown Chloe – but will she be speedy enough to fend off pretenders to the throne?

You can find half the dynamic EquiRatings team in the commentary box, but while Diarm Byrne props up the mic, his business partner and best friend Sam Watson will be blazing around the course in fifth position aboard the striking dun Tullabeg Flamenco. He'll need to be quick - after all, he's got busy Izzy Taylor just behind him wearing number six and riding the cheeky superstar-to-be Springpower. Cool, calm, and collected, she's one of the fastest women around.

Meanwhile, we'll see a match-race of future superstars of the British team as Junior European Champion Bubby Upton and Fernhill Rockstar face off against former Pony European Champion Yasmin Ingham and Rehy DJ. The last time we saw this competitive duo come head-to-head was in the Young Rider National Championships, when Yaz edged Bubby into second place. Could this be Bubby's redemption song?

Ireland's Cathal Daniels and Rioghan Rua have strong Chatsworth form, and they'll need to use all of it to close the backstop against the continental contingent. France's pin-up boy Astier Nicolas and Arpege du Mancel head a formidable front, while German national champion Julia Krajewski can never be underestimated. She'll head into the trenches on Amande de b'Neville, while Dutch national champion Tim Lips comes armed with the dynamic Eclips.

With four leg-winning combinations, eight leg-winning riders, and multiple Olympic medallists heading to Derbyshire to battle it out for their share of the £50,000 prize pot, leg one of the 2019 Event Rider Masters series promises to be action-packed from start to finish. And at Chatsworth? Well, nothing is ever guaranteed - no matter how many medals you've won.

The star-studded entry list also hosts a wildcard recipient. Wildcards are distributed on a leg-by-leg basis under three criteria: one is reserved for an entrant from a developing nation, while the other two are strategic wild cards for high-profile entrants who may not have otherwise made the cut. Our wildcard recipient for the Dodson & Horrell Chatsworth International Horse Trials is Sarah ‘Cutty’ Cohen, the 2017 Wiesbaden winner and 2018 series runner-up, with crowd favourite and ERM specialist Treason. Formerly a busy professional rider with a string of horses, Cutty now balances motherhood with competing her best friend and sole ride. That means that when she's in it, she's in it to win it.