Likely shake up of ERM leaderboard at Leg 4 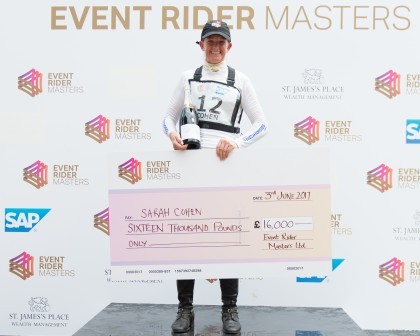 Britain’s Sarah Cohen (GBR) who topped the podium at Leg 2 in Germany in June and currently sits second in the series with 51 points. Sarah arrives at Jardy riding Treason, a combination that has jumped faultless rounds in both the showjumping and cross country phases of Legs 1 and 2, and are tipped to deliver a strong performance.  A competitive result this weekend could see them secure the lead on the overall ERM standings.

Gemma Tattersall (GBR) won the first leg of the 2017 series and secured further points at Leg 3, by finishing seventh. She currently sits in equal third with 50 points. Tattersall makes the trip across the Channel with the mare Chico Bella P, who has a fantastic record of two previous wins at this level and is another who could steal a cheeky lead in the series standings this weekend.

Sir Mark Todd (NZL), who broke his ERM jinx at Leg 3 last weekend by finishing third, will arrive at Jardy riding NZB Campino.  Until Barbury, an ERM placing had eluded the former double Olympic champion in all of his ERM appearances.  However, this combination has secured three wins at this level, and ‘the FEI rider of the 20th century’ comes into this fourth ERM leg in great form.

The 2016 ERM series Champion, Oliver Townend (GBR), pairs up with Cooley Master Class.  Townend has yet to score ERM points in 2017, but it wasn’t until the fourth leg last year that Townend began his domination of the series.  Oliver will be hungry to reverse his current series form this weekend and kick start his campaign to retain the ERM crown.

Alex Hua Tian represents China, riding his 2016 Leg 2 winning horse Don Geniro.  Following this win, the combination went on to deliver a very strong performance at the 2016 Rio Olympics, finishing in eighth place. Alex has stated his intention to target the 2017 series, and the combination have already proved they have what it takes to win a leg of the ERM.