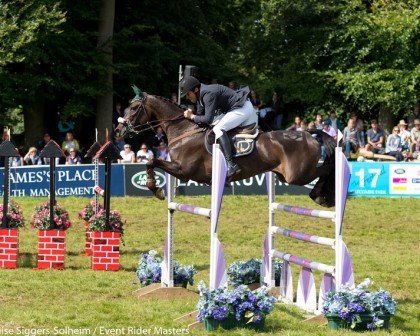 Brazil’s Marcio Carvalho Jorge will start the cross country phase this afternoon at Leg 5 of the Event Rider Masters in pole position at The Festival of British Eventing held at Gatcombe Park.

During a morning where the showjumping phase was once again was highly influential in the ERM competition, Marcio riding Lissy Mac Wayer jumped a brilliant clear round, adding just one-time fault. He will start out on the cross country on a score of 41.

Alexander Bragg (GBR) on board Zagreb jumped one of only three clears inside the time to take the second position on a score of 41.6.  Sir Mark Todd (NZL) with Kiltubrid Rhapsody added just two-time penalties to his overnight dressage score to start cross country on 44.50.

The two other riders to jump clear and inside the time were Ludwig Svennerstal (SWE) and Balham Mist and Caroline March (GBR) with Postmaster.  Both moved up the order from seventeenth to seventh and thirteenth to fourteenth respectively.

Overnight leader Oliver Townend riding Note Worthy slipped down the order to fifth after knocking down two rails.  He starts on the cross country on a score of 46.70.