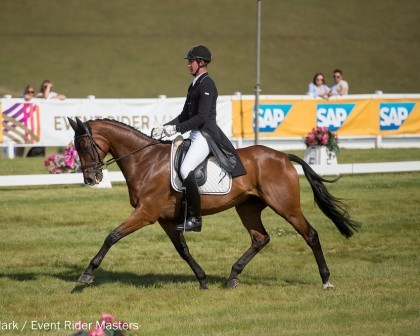 Records kept being broken at Day 1 of dressage at the third leg of the Event Rider Masters, with several personal best (PB) performances being produced from the forty strong field of horses and riders.  Andrew Nicholson (NZL) riding his 2017 Badminton winning hero Nereo were a combination to join this club, with a score of 34.9 securing them second place and a PB.  Just 4.1 marks separates Carlile and Nicholson going into Day 2. Nicholson is well in the hunt for a second win at the third leg of ERM series, as well as a sixth consecutive win at Barbury at CIC*** level.

“I think it might have helped us going after Upsilon’s beautiful test”, Nicholson commented, “It made me and Nereo raise our game.  Yes there was pressure, but that’s why we compete at this level”.

New Zealand riders also hold the third spot ahead of the show jumping phase tomorrow.  Despite making an error of course in his dressage, Jesse Campbell, riding the former racehorse Kaapachino, delivered a lovely test scoring 36.1.

“He was super.  It’s always nice to perform well at your local event, as we are based just over the hill from Barbury.   He is a very experienced horse and good thoroughbreds tend to give you their hearts, and that’s what he’s done for me today”.