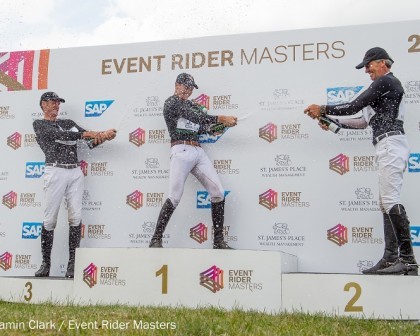 New Zealand’s Andrew Nicholson, riding last year’s Leg 3 winner Nereo, was unable to catch the French combination. Andrew jumped clear in the showjumping but added one-time fault, then delivered another masterclass on the cross country, but 5.6 time penalties meant he had to settle for second place, finishing on a score of 41.5.   Although visibly delighted, this ended the New Zealander’s five-year reign at his local event at this level.

“Nereo did a wonderful job.  We stayed in a nice rhythm on cross country as I felt Thomas and Upsilon had a strong lead, so didn’t want to scorch around trying to catch them. I expected them to deliver and they did.  My fellow is a wonderful horse and we know each other very well.  I am delighted for him and all his connections”.

Former Double Olympic champion Sir Mark Todd (NZL) celebrated his first ERM podium finish, taking third place.  A win or placing in the series has eluded Todd to date, but his ride Leonidas II was foot perfect in both the showjumping and cross country, finishing on a score of 42.3.

“It’s gone very well this weekend.  I have been fighting ERM demons in previous legs, but it’s all come together today.  Barbury is one of the most beautiful Eventing venues in the world and it’s a great to be part of the series and finally get on the podium!”.

The Event Rider Masters continues next weekend in France, at Haras de Jardy (15th and 16th July) for the fourth leg of the 2017 series.