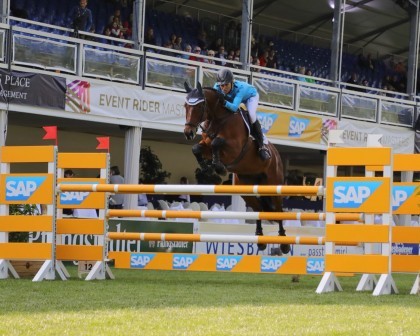 The morning of day one in Wiesbaden produced the lowest average ERM Dressage scores of all time but with only the top 5 (20%) achieving sub-30 scores the marks weren't flowing freely from the Judges.

Sitting in third place going into the Show Jumping this afternoon was Dutch Olympic Event Rider Tim Lips and his ride Bayro on a score of 27.7

Second place after Dressage were World Number 1 and 2016 ERM Champion Oliver Townend and Cillnabradden Evo. Leading by a large margin on his score of 22.8 for the majority of the morning Oliver said, "I am thrilled for the horse and want to thank Andrew Nicholson for giving me the opportunity to have the ride on him. He just keeps getting better and better."

Taking up first place going into the show jumping were European Gold Medallists Germany's Ingrid Klimke and SAP Hale Bob OLD. As second last to go Ingrid knocked Oliver off the top spot by the smallest of margin by posting 22.2.

The Show Jumping time proved influential in this afternoon's session with only 44% of the field avoiding time penalties.

There was no change at the top of the leaderboard with Ingrid, Oliver and Tim all achieving clear rounds inside the time.

With a climb up the leaderboard of 13 places, Sweden's Ludwig Svennerstal and his ride EL Kazir SP have upped Ludwig's chances of landing another podium finish to add to his second place at Gatcombe last year.
The challenge on Saturday will come from the clock. The Wiesbaden clear jumping rate across the country is currently 65% so we are expecting a tough challenge tomorrow and a big shuffle on the final leaderboard. It is worth noting, however, that nobody has made the time at Wiesbaden in the last two years.

The clock WILL prove influential as SAP Hale Bob OLD has an average at CIC3 star of just 2.4 time penalties and Cillnabradden Evo is just behind him with 0.3  with 2.7.