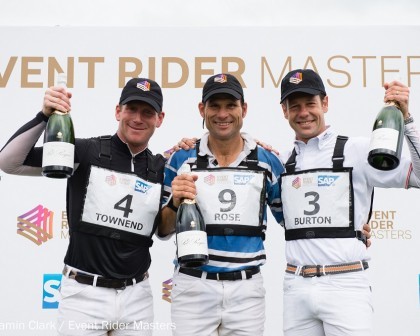 2016 Olympic bronze medal winning Australian team mates, Shane Rose and Chris Burton ensured their nation dominated the ERM podium this weekend, by filling the first two spots respectively at Leg 6 of the Event Rider Masters (ERM). This is the first time Australia has featured on the podium in the 2017 series.

Shane Rose riding Virgil won the sixth leg of the ERM series, which saw the leaderboard dramatically change across each Eventing phase.    After being positioned in ninth place after dressage, Rose started out on the cross country in third position after jumping a clear round in the showjumping earlier on Sunday.   The combination performed an impressive, very accurate and strong cross country round adding just 2.8 time penalties, finishing on a score of 45.9.

Shane, a cancer survivor, has recovered from multiple riding injuries including having his face reconstructed after receiving a kick from a horse to the head.  He also breaks racehorses for a living at his Australian base in New South Wales. This year he has spent the Eventing season competing on the British and European circuit.  He has been based with fellow Australian rider Sam Griffiths, who he dedicated his ERM win to. Rose said;

“Virgil felt like he was finding the ground tough in parts of the cross country, but once we were in the woods where there was a firm base he got his wind back and then travelled really well and galloped home nicely. It’s one of the best rides I have had on him.  He will now head back to Australia, so it’s a great note for him to finish his northern hemisphere trip on.