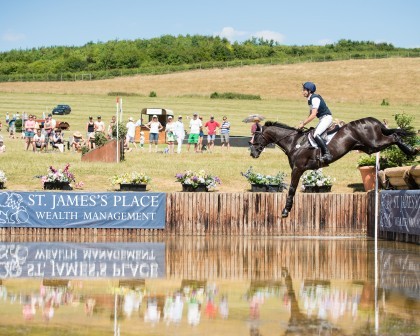 Leading the charge is Australian Olympic Eventer Chris Burton (AUS) who has placed 1st and d in the last two Legs (Arville, BEL & Barbury GBR. Following an exceptional performance at the St James’s Place Barbury Horse Trials in the UK, Burton clinched the overall series lead from Laura Collett (GBR) and is now on 75 points ahead of Collett’s 70.

Gathering late momentum to rise up the leader board after a 3rd place at Barbury, last year’s Series winner, Gemma Tattersall (GBR) heads to Jardy with 14 year old mare, Chico Bella P. Coupled with placing 4th at Leg 3 in Arville, a podium spot for the pair in France would see her pile the pressure on the top two.

Slipping down the Series order slightly to 4th, New Zealand Olympian, Tim Price’s recent performances haven’t bagged him the points he was aiming for. Bringing out the big guns in France in the form of his 4* ride Wesko suggests Tim is hungry for a place on the Series Podium. However, the Kiwi rider continues to hold 4th spot just one point behind Tattersall in 3rd.

In 5th heading into Leg 4 is ERM stalwart and crowd favourite Bill Levett (AUS) who has competed in 14 of a possible 17 Legs so far. Finishing on the podium for the first time in their ERM career at Leg 3 in Belgium, Bill and Shannondale Titan aren’t strangers to putting in big performances when they need them. If they can finish well at Jardy they shouldn’t be discounted in the running for a podium place going into the last Leg in Scotland.

This weekend promises top-class sport playing out against an impressive backdrop just a stone’s throw from the Palace of Versailles, Paris. With big players such as World Number 1 Oliver Townend (GBR), Jonelle Price (NZL), Sir Mark Todd (NZL), Michael Jung (GER), Maxime Livio (FR), Laura Collett (GBR), Izzy Taylor (GBR), Karin Donckers (BEL), Gwendolyn Fer (FR), Shane Rose (AUS) and Tim Price (NZL) all vying for a place on not only the Leg 5 podium but also the 2018 Series leader board, this weekend is lining up to produce some outstanding sport.