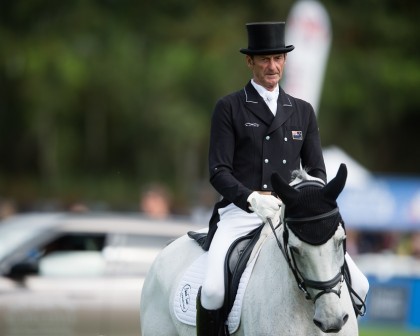 Riding the grey gelding Kiltubrid Rhapsody Sir Mark Todd sits in second place after the dressage phase at Leg 6 of the Event Rider Masters.  Todd who represented New Zealand at his seventh Olympic games in 2016, is the oldest ERM competitor at sixty-one years.  Todd rode the same horse into fourth place at Leg 5, which secured him third on the ERM leaderboard.  If he can deliver a podium winning performance this weekend it will put him in to strong contention to challenge for the overall series title at the final leg.

Commenting after his dressage, which he also choregraphed some of the movements to his music choice, a first for an ERM competitor to try this, Sir Mark said;

“Kiltubrid Rhapsody is really improving in this phase as he is only ten years old, we need to polish some areas but he was very good today.  I decided to change my music and thought I may as well time it to the some of the movements in the dressage test, and it has been fun putting it together.   To win tomorrow I will need to jump clear and go fast as I can on the cross country.   It will be a challenge but he’s honest and does have a good gallop and can be quick, so we will see”.