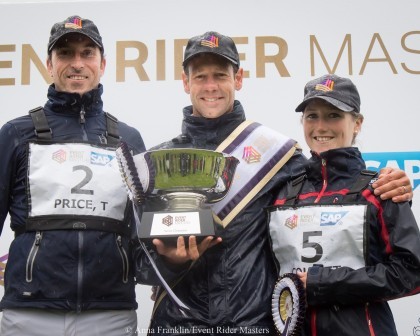 Putting in a stellar performance across all three phases, Australia’s Chris Burton sealed his 2018 Series and Leg wins with an effortless Cross Country clear round inside the time on the Graf Syndicate’s Graf Liberty

Speaking of his Series win Chris said, “This is a really special moment. I couldn’t be happier. There was a lot of pressure on me coming into this weekend, most of it I put on myself – and I was really worried I might do something silly like jump the wrong jump or something. I am thrilled for Graf Liberty’s owners and over the moon with the horse. I’ve watched the guys winning the ERM legs and thought to myself, Gee I’d love to win an ERM leg never mind the Series.”

Disappointing Show Jumping rounds for both Laura Collett & London 52 and Tim Price & Wesko this morning were followed by classy clear cross country rounds which meant that they both did enough to hold their places on the Series Leader Board and claim 2ndand 3rdrespectively.

Speaking after his round Tim said, “Wesko soaked it all up - the rain, the atmosphere and the jumps and gave it such a good go. It really is such fun to have him back and feeling so well – he makes it look so easy.”