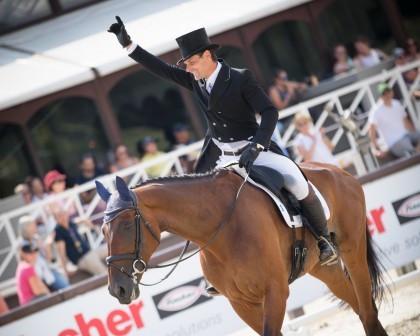 We've passed the halfway point of the season and this weekend, we head to Paris' Haras de Jardy to usher in this crucial juncture in the 2019 series. Holding court over a stud farm with centuries of history, the event features one of the most exciting fields we've seen this year. Points gained here could make or break our competitors' 2019 leaderboard campaigns - but who will see their name in lights in the City of Lights? Join us for the Jardy Draw.

Horse and rider combinations are seeded into three groups based on prior performance and dressage averages.

Once they're through the initial seeding process, our competitors numbers are randomly drawn by ERM presenter Nicole Brown. The draw determines the order in which they'll enter the ring - will they have the tough task of trying to impress the judges early on? Will they go straight after an Event Rider Masters champion? Or will they close out the day's competition, leaving an impression on the scoreboard and the spectators, for better or for worse?

German rising star Niklas Bschorer will be the first competitor down the centreline, riding Lord Shostakovich. They were impressive in their ERM debut at Arville, finishing just outside the top ten - but can they improve upon their first-phase performance on Saturday? First in the arena is a tough draw, but Niklas has a secret weapon - he comes from a family of dressage riders. He'll be followed into the atmospheric main arena by our sole Polish representative: Mateusz Kiempa pilots Grand Supreme in both horse and rider's ERM debut.

Tom McEwen will be our first series title contender in the ring: currently sitting in ninth place on 28 points, he'll be aiming to lock in a podium finish and gain some valuable ground on the leaders with the young CHF Cooliser. But the highlight of the first session will be the face-off between two former Jardy winners, each mounted on up-and-coming horses.

German dynamo Michael Jung, a winner here in 2017, heads down the centreline on Creevagh Cooley at 12.30 p.m. CEST, while reigning champion Alex Bragg closes out the session at 12.53 p.m. CEST riding Alcatraz.

There's plenty of French talent to enjoy after the lunch break, with experienced competitors including Sidney Dufresne and Tresor Mail, Camille Lejeune and Tahina des Isles, and Sebastian Cavaillon and Sarah d'Argouges on the line-up for the second session. But it's not entirely the dominion of the home defense: ultra-competitive Kiwi Jonelle Price, currently sitting second on the series leaderboard, never lets a mark go to waste. She takes to the main arena at 15.00 p.m. CEST riding Grovine de Reve.

The final session begins with a bang, as series leader and 2018 ERM champion Chris Burton kicks off proceedings with his new ride Lawtown Chloe. She finished second at Wiesbaden on her dressage score of 28.3 - can she go one better here? Or will Olympians Gemma Tattersall and Quicklook V, the princess of polished performances, edge the lead? They'll both face stiff competition from three familiar faces: World Number One - and Arville winner - Tim Price brings forward the enormously exciting Falco, while 2018 series runner-up Laura Collett will partner up with the black beauty Dacapo.

And ending the day's action? Aussie Bill Levett and his experienced ERM partner Shannondale Titan. They're consistent, competitive, and hungry for a win - could this be their weekend? Watch live and for free on www.eventridermasters.tv to find out.