The Lignières Finale: Tattersall on Top and Burton Unbeatable 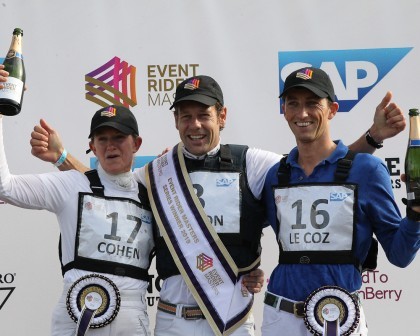 The drama of the day was evident from the off as our competitors braved a deluge in Lignières' sprawling main arena to tackle the toughest showjumping course in Event Rider Masters' history. Not a single combination would deliver a fault-free round and just two – Tim Price and Ascona M and Michael Jung and Star Connection FRH - would manage to stop the clock inside the fiendishly tight time allowed, though each took a rail apiece with them on their hunt for economical lines.

Others would have worse luck - the normally exceptional showjumper Billy the Red and his hugely experienced rider Tina Cook took two poles and added 3.6 time faults, while series contender Jonelle Price had three fences with Grovine de Reve and added 3.6 time penalties. Alex Bragg saw his chances of a podium finish slip just out of reach when Zagreb pulled two rails and added two time penalties, dropping the duo from fourth after dressage to ninth.

But where one goes down, another must come up, and the complexity and incredible influence of the showjumping allowed some key contenders to make their move. France's Gireg le Coz, battling for the series title with Aisprit de la Loge, produced the round of the morning to add just 1.2 time penalties, while Gemma Tattersall and Jalapeño picked up a mere 2 time penalties to take the lead as we moved ahead to the final cross-country session of the 2019 Event Rider Masters season.

And what a cross-country session it was. After the withdrawal of series contender Jonelle Price, the door was opened wide for a new face to step onto the podium, and with the twisty, technical track causing a number of problems from the offset, nothing was guaranteed for our tightly-bunched candidates.

19-year-old Phoebe Locke and her experienced partner Pica d'Or were the class pathfinders, but their otherwise classy round came to an early end when the young rider took a tumble at one of the final combinations on course. When the next rider on course, Belgium's Tom Goeman, fell at the second fence, and French superstar Maxime Livio picked up 20 penalties aboard Api du Libaire as third out of the box, it became readily apparent that today's track wouldn't be a mere stroll in the park.

Sitting in tenth place before cross-country, series leader Christopher Burton had everything to lose - and everything to gain - as he left the start box with Quality Purdey. To maintain his standing, he needed to go fast and clear - but no one before him had come close to the 6:55 optimum time. A scrappy start paved the way for one of the most significant rounds of the day, and Chris ultimately crossed the finish line eleven seconds under the time - despite taking two long routes. The pressure was well and truly back on.

With proof that the time was gettable on the board, a spate of lightning-fast clear rounds followed: Alex Bragg and Zagreb added just 0.8 time penalties to claw their way back up to 7th place, while Arnaud Boiteau and Quoriano ENE HN, buoyed on by an ebullient home crowd, sailed home with three seconds to spare.

"It's like a championship - it's France, so there's a big crowd, and it helps the horse and me to go faster and try to do the best," said Arnaud, who climbed ten places through the day to finish in eventual fourth.

A slow run from Pau-bound Tim Price and Ascona M and the surprise retirement of Oliver Townend and Alcatraz pushed Chris Burton further up the leaderboard, and as his hold on the series title tightened, the match race between Gireg le Coz and Sarah Cohen intensified.

Jardy winners Gireg le Coz and Aisprit de la Loge produced quality jump after quality jump, but ultimately, the time wasn't on their side: they added 2.8 time penalties to stay in fifth place, while fellow Frenchman Arnaud Boiteau moved up into fourth.

Sarah 'Cutty' Cohen and seventeen-year-old Treason, for their part, produced the round of their lives to cross the finish line one second inside the time, securing themselves a podium finish on both the leg and series podiums. Now, all they could do was wait to see which tier it would be on each.

When the top spots are occupied by a previous ERM series champion and the last winner of eventing's Grand Slam, climbing is a tough call - and neither Gemma Tattersall nor Michael Jung looked like faltering for a moment on course.

A foot-perfect round from Michael Jung and his two-time leg winner Star Connection FRH put him in second place on the live podium.

"It was really all there to enjoy," he said with a broad smile. "Star Connection is a really great horse, and I know I have to let him run from the beginning because he's not a racehorse, and he doesn't have a big stride like a racehorse. But that keeps me fast to the jumps."

He had done what he could - and ultimately, second place would be where he would stay. 2017 series champion Gemma Tattersall left the start box on a mission with Jalapeño.

They looked every inch a long-term partnership, belying the single season they've had together, eating up the course and romping home with three seconds to play with. The Lignières title was Gemma's.

"I've been really good at winning the other four-star section when ERMs have been at venues, and today I've managed to win the ERM - get in there!" she laughed from atop the podium, where she accepted a cheque for €18,000 and prizes from the Monart Elite Horse Sales.

"I'm so happy, and so pleased with the horse today," she continued, acknowledging the efforts of owners Chris and Lisa Stone. "It's a new partnership [with Jalapeño]; she's been beautifully produced by Karin Dockers. I've had to take the reins and we've had to get used to each other. We've had a couple of whoopsies, but we've done our homework, and today it came good!"

Her third-place finish on the leg podium ensured Sarah Cohen a place on the series podium, too, for the second time. She finished third in the 2019 rankings - a remarkable accomplishment for the former pro turned passionate amateur, who balances family life with competing Treason, her only horse.

"It's taken the whole season, but he was just magic out there - he's a star," said 'Cutty' of her longterm partner, who has been one of the most consistent horses on the circuit. Though Cutty hopes to log one more season with the gelding, could his eventual retirement from top competition prompt a comeback for his rider?

"I could really do with a back-up horse for him, so if anyone wants to be involved with the ERM, I have stables," she smiled with a twinkle in her eye. "Just having the one horse, it's amazing to be competitive with these top guys - and it makes me want to do a little bit more. I'll be on the search now."

France's own Gireg le Coz became a break-out star of the ERM series when he came from nowhere to win the Jardy leg earlier this summer, and since then, he's proven just what he's capable of with top horse Aisprit de la Loge. His fifth-place finish today sealed the deal, and the affable Frenchman took the runner-up spot on the 2019 podium. A star, we suspect, is born.

"My horse has been fantastic for all the four legs I did," he said. "I have to say thank you to my horse, my owners, and everyone who makes it possible in the ERM - thank you."

And so the 2019 Event Rider Masters championship went to the indomitable Aussie, Christopher Burton. His performance at Lignières proved to be the fastest round of the day, andhelped him climb from 15th to eventual sixth place, clinching enough valuable series points to ensure he defended his 2018 Masters title.

"It's not hard when you're on such a lovely mare," he smiled, reflecting on his remarkably fast round. "We love her - she's truly extraordinary, and such a pleasure."

This makes Chris the first person ever to win the series twice - and as he held his £30,000 bonus aloft, he thanked the dedication of his team and owners for laying the foundations for his victory.

"This is our favourite part of the ERM, if you've gone clear and get to sit up here," he laughed from the top spot of the podium. "It's amazing - I still can't believe it. I had such a good year last year that I really didn't think I could ever do it again. We're stoked! It's a wonderful series to be a part of - and right now, we're just going to enjoy the moment."