The show jumping shakes up the order at the Finale 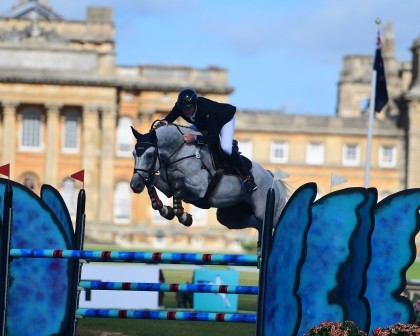 An influential Show Jumping course, designed by Di Boddy, shook up the leaderboard this morning.

Dressage leader Astier Nicholas had a round he would like to forget with Molakai, picking up 18 faults, which dropped him outside of the top 20.  However, it was still a French leader going into the Cross Country as the 8 year old stallion Upsilon, ridden by Thomas Carlile, jumped an impeccable clear round to go forward on his dressage score of 41.7.

A clear round from Aiofe Clark and Fernhill Adventure moved her up the leaderboard from 8th after dressage to 2nd as she capitalised on a single time fault from Nicola Wilson and One Two Many, who climed the order to 3rd.

Series title contenders also moved in to the top 10 and a clear for Oliver Townend and Cillnabradden Evo slotted them into 4th place.  Jonelle Price dropped from 2nd to 8th with a pole down and a time fault with Cloud Dancer and Gemma Tattersall and Chica Bella P were unlucky to roll a pole to finish the second phase in 10th.

With just 28 seconds on the Cross Country covering the top 20 combinations, the scene is set for a dramatic and exciting conclusion to Leg 6 and the fight for the Event Rider Masters series title looks to be well and truly on!