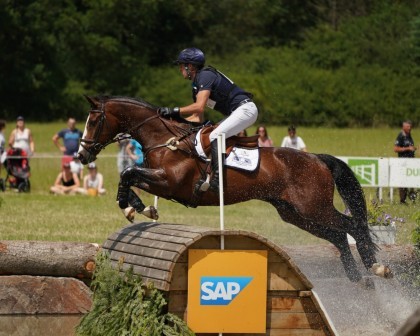 After overnight leaders Gemma Tattersall and Quicklook V retired following a runout at the first water complex, Australia’s Chris Burton and Quality Purdey were momentarily named the winners with what he thought was a clear round inside the time.

When the ground jury elected to retroactively give Chris 11 frangible penalties for knocking the front element of the triple bar at fence 11, he ultimately dropped to third place on a final score of 40.7 and boosted Tim to victory.

“I heard the timber go down, and I tried to look back to see it,” Chris said. “I feel bad for the horse because I didn’t feel like she hit it that hard. Obviously we respect the rules, and the MIM clip is a really great system and a great rule for the safety of horses and riders. I’m still lucky enough to be on the podium, and being behind these two is no mean feat.”

Tim and Wesko were ultimately the only pair to jump clear and inside the optimum time on Rüdiger Schwarz’s cross country course, which saw a 53% clear jumping rate. They were also the only pair to finish on their dressage score, rising up from fourth place after the first phase to take the win on a final score of 30.5.

“The good horses make you look good, don’t they? I’ve missed him because of moments like that. He’s just so exceptional. The corner in the first water, I couldn’t quite see the line, but he was on it," Tim said.

"He’s just a fantastic horse. Of course, it’s a partnership, and we’ve been together for a long time, so it was great to showcase that at places like this. It’s nice to tick all the boxes and come home healthy.”

Jonelle Price added 6.8 time penalties with Faerie Dianimo to finish on 39.1 for second place in the mare’s first international run since winning the Luhmühlen CCI5*-L last year. The result is Jonelle’s best podium placing to date and her first time back on the podium since finishing third at Blenheim Palace with Cloud Dancer in 2016.

“I’ve been a bit absent from this podium, so it’s nice to be back, especially with this little mare,” Jonelle said. “She’s quite a busy little mare. She’s a bit of a handful — a very good handful — but she is a feisty little thing. A twisty, turny track shows that a bit more, but she showed all her experience, and it’s just fantastic to have her back at this level.”

Looking to the rest of the leaderboard Great Britain’s Kirsty Johnston and WTTL Opposition Sky Law added 4.4 time penalties on cross country to rise from 10th after show jumping to finish fourth on 43.7, her best ERM result to date.

Italy’s Pietro Sandei and Rubis de Prere added 8.4 cross country time penalties, which boosted them from eighth after show jumping up to finish fifth on 44.7.

Despite missing out on the Arville win, Chris Burton still rose to the top of the ERM Series Rankings with 54 points. Jonelle Price now sits second in the rankings on 46 points, followed by Laura Collett in third on 45 points.

Laura sat fifth after show jumping with Dacapo and was chasing valuable series points when a runout at the Wilberry Wonder Pony Shoulder Brush at fence 7B cost them a shot at a podium placing.

Bill Levett and Shannondale Titan, also chasing a top result after sitting fourth overnight, had a costly mistake when they jumped to the right of the flag at 5C, the SAP Water Corner, where Gemma Tattersall also came to grief.