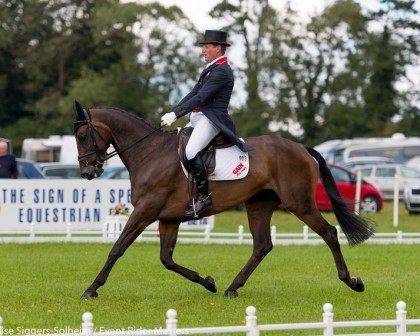 Riding the thirteen-year old gelding, Note Worthy, Oliver Townend (GBR) produced a beautifully relaxed and consistent dressage test to lead after the first day of competition. Oliver was one of only two riders to secure a dressage score in the 30’s, of 38.7 penalties.   His dressage score is 0.4 better than the dressage mark he scored at this leg last year when riding Cillnabradden Evo. The pair then went on to win the leg and subsequently the 2016 ERM series.

Oliver commenting after his dressage sent out a warning shot to his ERM competitors;

“I love riding horses for Mr Cawthray, who owns Note Worthy and I am delighted for him and the horse today, he is an amazing supporter.  I am focusing on ERM now the European Championship selection is out of the way, and I am hoping to deliver some big results again in the second half of the series this year”.