Townend scores a win for the Brits 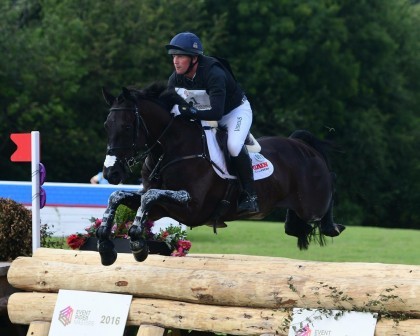 Oliver Townend, riding Cillnabradden Evo, became the first ‘Brit’ to top the Event Rider Masters podium scooping the first prize of £16,000 at the Festival of British Eventing at Gatcombe Park this afternoon.

ERM debutant and French raider Tom Carlile, riding the eight-year-old stallion Upsilon, finished in second on a score of 55.8. Ireland’s Elizabeth Power stormed up the leader board from seventeenth to secure third place after performing the fastest cross-country of the day on board Soladoun, picking up just 1.2 time penalties to complete on 56.5.

Following the withdrawal of the overnight dressage leader Andrew Hoy and Cheeky Kalimbo after a costly showjumping round, Oliver was left in pole position going out on the cross-country having jumped a clear showjumping round. Oliver and 'Gary' completed the unique Gatcombe track with no jumping faults, adding 10.4 time penalties to their dressage to secure first place on a final score of 49.5.

It was an extraordinary win for Oliver and Cillnabradden Evo as twelve months earlier the horse had a fall at the last fence at Gatcombe, which left his rider, Andrew Nicolson, with a severely broken neck. However, both the horse and Nicolson have demonstrated their ability to bounce back by winning legs of ERM albeit with different partners. Nicolson winning leg three at Barbury last month riding Nereo and Cillnabradden Evo's success today with Townend on board.

Oliver, who is based in Ellesmere, Shropshire said:
“We hope to aim Gary at the remaining ERM competitions this year, as on his day he is a very competitive horse, which he has just proven. He was very good today and I feel built for this sort of class, I am delighted for him.  Gatcombe is a special place, I’ve been coming here since I was eight years old and I love it. It’s been a lucky event for me as I think it’s my eighth championship win here. The prize money is pretty good to – I need to make a living and the £16,000 today certainly helps”!

It was a case of every cloud has a silver lining for ERM second placed Tom Carlile. After not being named on the French Olympic squad for Rio Tom, who is based in France and has not competed in the UK this year, decided to make the trip across the channel for a stab at the £50,000 prize money pot up for grabs at The Festival of British Eventing.

“This is a real consolation for us, after missing the ticket to Rio and as it turns out I was obviously a lot better off coming here!”, smiled Tom after securing his cheque for £12,000 for second place.

“There were some big cross-country questions for Upsilon as he’s so young, but he coped really well. He’s fast, although I think he was feeling the burn on the last hill, but he tried his heart out today and I’m very proud of him”

Quick cross-country rounds were predicted to shake up the leaders and Elizabeth Powered proved this after completing the fastest cross-country round of the day. This performance shot her and Soladoun from seventeenth place after showjumping to finish eventual third.

“I can’t fault my horse today, he tried his heart out and was absolutely brilliant”, Elizabeth commented visibly delighted.

The 'Red Thunder from Down Under' Paul Tapner earned himself valuable series points finishing in fourth place riding Yogi Bear IV. Tapner now leads the Event Rider Masters with 87 points and is clearly hungry for the £30,000 leading series rider bonus. In second is Gemma Tattersall (66 points) and in third is Astoer Nicolas (59 points). Click here to see the full ERM Rankings.

The results of all previous ERM legs and competition can be viewed for free on all platforms from anywhere in the world by clicking here.