Triumph for Tattersall on Day One of Arville 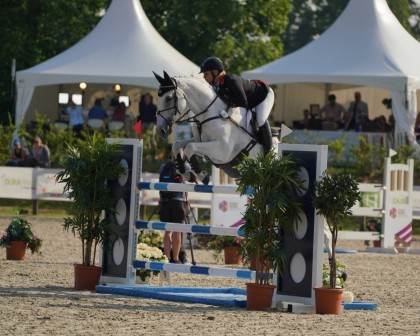 The 2017 Event Rider Masters champion proved unsurpassable on the first day of competition at Arville, throwing down the gauntlet with a dressage score of 28.8. But Gemma Tattersall, who is no stranger to the lofty heights of the leaderboard with her Olympic mount and recent Bramham CCI4*-S winner Quicklook V, felt the pressure from the assembled judges. Dr Ernst Topp, Dr Katrin Eichinger-Kniely, and Eric Lieby maintained stringently high standards, with only three competitors dipping below the thirty barrier.

"I don't quite know what else they wanted," laughed Gemma after her test. "She felt better than she had at Bramham, where she scored a 21.6. She was light in the contact and she did beautiful changes."

All would be forgiven, though, when 'Princess Pebbles' - known for her love of a sunny day and a surface - pinged around Wilfried Thiebes' tough showjumping track to hold her lead as we look ahead to tomorrow's cross-country challenge.

"She's such a lovely horse, and it's so lovely to have her back competing at this level - it's really exciting," enthused Gemma, whose great grey mare had suffered an injury at 2017's European Championships. The plucky mare underwent an operation, and was then sidelined with a minor leg injury, returning to international competition at the beginning of this year.

The pair certainly had their work cut out for them this afternoon. Seven of today's competitors jumped clear, but more were scuppered by knocked rails and time penalties, which affected even notoriously speedy competitors like Jonelle Price. Gemma, who managed to jump clear and stay within the allotted time, used her considerable knowledge of her horse to get the job done.

"Sometimes, with her, it's not all about making the time - she spends a lot of time in the air, and if I rush her, she can have a rail," she explains. "I knew I could take a stride out at the double, but then I was going to have to be careful. It was quite well thought out!"

The reigning Event Rider Masters champion - and last year's Arville winner - holds a close second place, and the fastest man in the world will be on a mission to go one better over tomorrow's twisty, tricky track. Australia's Chris Burton rode Quality Purdey to a score of 29.7, which he maintained through the showjumping after delivering the fastest round of the day.

"She was beautiful and relaxed, and I've got so much time for the mare," he said. "I'm very lucky to have the ride on her. It's a good day for us."

New Zealand's Tim Price is on a roll: he's not just the newly-minted World Number One, he's also the sport's most recent five-star winner after he took top honours at Luhmühlen last week. But he'd won that five-star once before, in 2014 - and his ride then was his partner today. Wesko - also back after an injury that put him out of contention for the Rio Olympics - climbed a placing to sit third overnight on his dressage score of 30.5.

"He's a great jumper and I always look forward to that side of things with him," said Tim, who rued two costly mistakes in his dressage test. "They were the same two mistakes I made at Wiesbaden - I messed the trot up last time, and I did here too! Nine times out of ten, he comes really good in that phase. But I was really pleased with him today. I've made the odd mistake with him, but today he jumped his socks off."

Wife Jonelle, also riding a Luhmühlen winner in Faerie Dianimo, sits sixth. She played double duties, jumping a clear round with 1.2 time penalties and then heading to the in-gate to support Tim.

"The horse is beautiful and Tim rode him beautifully," she said. "They've been together a long time, and Wesko wouldn't be out of place as an American show hunter, to be honest."

Seven of the 17 combinations in the field (41%) jumped clear show jumping rounds inside the time allowed of 80 seconds.