Welcome to the Millstreet Dressage draw 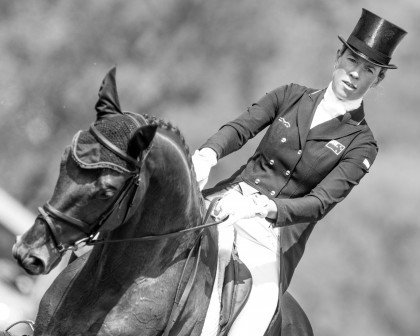 As we freewheel our way to the exciting conclusion of the 2019 series, ERM heads to Ireland's Millstreet which promises to provide plenty of leaderboard drama. Nestled in the shadow of Drishane Castle, Ireland's premier competition provides a worthy battleground for a first-class field. It's crunch time for our ERM series contenders - but who will speed to the top on Irish soil? Join us for the Millstreet Draw.

Horse and rider combinations are seeded into three groups based on prior performance and dressage averages.

Once they're through the initial seeding process, our competitors numbers are randomly drawn by ERM presenter Nicole Brown who is joined by Emma Duggan of the Millstreet organising team. The draw determines the order in which they'll enter the ring - will they have the tough task of trying to impress the judges early on? Will they follow an Event Rider Masters champion? Or will they close out the day's competition, leaving an impression on the scoreboard and the spectators, for better or for worse?

As a stalwart of the Irish team, Michael Ryan is a fitting pathfinder for the weekend's competition - he'll be the first rider to head down the centreline at 12:15 pm, partnering his up-and-coming superstar Barnahown Corn Hill. But the competition will be hot on his heels, as Gireg le Coz and Aisprit de la Loge - our 2019 Jardy victors - follow them at 12.23 p.m. With the taste of victory still fresh, can the flying Frenchman deliver the goods and challenge for a second jewel in his crown?

Friday's first group is full of fierce and focused competitors, from Ireland's own Cathal Daniels and his former Ballindenisk winner OLS King Aragon (12.47 p.m.) to speed queen Esib Power and the five-star machine Samuel Thomas II (13.27 p.m.). They've throw down the gauntlet for a shot at a win on home soil, but can Izzy Taylor and Perfect Stranger deliver a first-phase score that leaves them in the dust? Make sure you're tuned in at 13.19 p.m. to find out.

The competition gets ever hotter as we head into the second session of the day, commencing at 14.35 p.m. Young rider superstar Bubby Upton gets the party started after the lunch break with the striking Cannavaro, catapulting us into a pool of ferocious talent. We'll see Tom McEwen and his Belton winner Figaro van het Broekxhof (14.43 p.m.) go head to head against Sam Watson and his Camphire winner Imperial Sky (14.51 p.m.) - but a double-feature of podium power-players follow them in Sarah Cohen and Treason (14.59 p.m.) and Lucy Jackson and Superstition (15.07 p.m.).

As we head into the final session, there's no room for error. 2016 champion Oliver Townend kicks off proceedings with his Burghley winner Ballaghmor Class at 16.10 p.m, but if there's any match for his record-breaking dressage scores, it'll be the World Number One Tim Price. He'll head down the centreline at 16.18 p.m. with Arville winner Wesko.

Liz Halliday-Sharp is no stranger to sub-30 marks, particularly when she partners her long-term campaigner Fernhill By Night (16.42 p.m.). But nor is Bramham CCI4*-S winner and Olympian Quicklook V, who'll make her moves on the leaderboard with 2017 champion Gemma Tattersall at 16.58 p.m. Can Princess Pebbles overcome the wet weather to deliver her best moves? Or will she be surpassed by Alex Bragg and Zagreb (17.14 p.m.)?

Our last competitor of the day could turn the competition on its head - don't miss Emily King and Brookleigh at 17.22 p.m. Hot on the comeback trail, they're one of the lowest scoring-combinations in the field - could this be their weekend? Watch live and for free on www.eventridermasters.tv to find out.

The full draw can be watched here and a full list of start times found here.