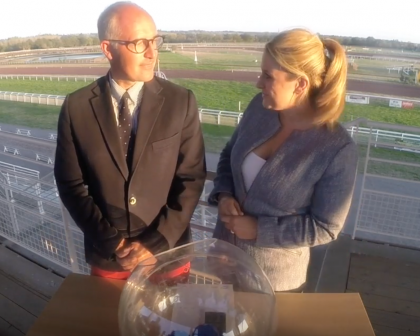 It's all been leading up to this: the Event Rider Masters 2019 finale, taking place this weekend in central France's Lignieres-en-Berry. A top-class and truly global field of 19 horses and riders - six of whom will be battling to become the series champion - comes to France with one common goal: the top spot on the final podium of the year. But will your favourites enjoy an advantageous position, or will they find themselves with a tough job on their hands to fight for the lead? Join us for the Lignieres draw and find out.

Horse and rider combinations are seeded into three groups based on prior performance and dressage averages. Once they're through the initial seeding process, our competitors' numbers are randomly drawn by ERM presenter Nicole Brown who is joined by Emmanuel Legarde of the Lignieres organising team. The draw determines the order in which they'll enter the ring - will they have the tough task of trying to impress the judges early on? Will they follow an Event Rider Masters champion? Or will they close out the day's competition, leaving an impression on the scoreboard and the spectators, for better or for worse?

Saturday's competition gets off to an exciting start with 2016 series champion Oliver Townend heading down the centreline as our pathfinder with new ride Alcatraz at 10.15 a.m. local time/9.15 a.m. BST. At 10.30 a.m., we'll see our first home-nation rider of the day - and Jardy winners Gireg le Coz and Aisprit de la Loge have plenty to fight for. Gireg sits third on the series leaderboard, just five penalties from the top in his first year contesting the Event Rider Masters. Young rider Phoebe Locke wraps up the first session at 10.53 a.m. with Pica d'Or, at what has been a happy hunting ground for them - they scored a 24.9 at Lignieres CCI2*-S in their first international together last year.

The competition gets ever hotter as we head into the second session of the day, commencing at 11.15 a.m. local/10.15 a.m. BST. The home side brings forward some of its fiercest competitors, with Maxime Livio leading the way aboard Api du Libaire.

Tom Carlile, the two-time winner of the ERM's Barbury leg, follows at 11.23 a.m. riding Atos Barbotiere, while Arnaud Boiteau concludes the session at 11.53 a.m. with Quoriano ENE HN. And between them all? Indomitable Kiwi Jonelle Price (11.30 a.m.), who sits in fourth place on the series rankings and will look to climb onto the podium with Grovine de Reve this week. Japan's Kazuma Tomoto (11.38 a.m.) has swiftly become one of the most formidable competitors in the world - and with the former Astier Nicolas ride Vinci de la Vigne JRA, he hasn't been out of the top six in an international this year. Watch them closely.

The final session of the day, commencing at 12.15 p.m. local/11.15 a.m. BST, is where things really start to get interesting. Michael Jung and Star Connection FRH whet the palate as the first to go - and the previous winners of Wiesbaden and Jardy are expected to throw down the gauntlet with a mid-to-high 20s score. Though they'll be hot in pursuit of a win in this leg, they can't quite catch up with the series leaders - but Sarah Cohen and Treason, who follow them into the arena at 12.23 p.m., certainly can. In fifth place on the current rankings, Sarah sits just 10 points behind the leader.

And what a leader he is. You won't want to miss the Australian sensation Chris Burton (12.45 p.m.), our 2018 Event Rider Masters champion, who leads the way for 2019. Riding Quality Purdey - his fast and ferociously clever dragon of a mare - he'll be one of the hottest topics at this weekend's competition. But if there's one rider who can threaten his grasp on the Lignieres title, it's fellow Antipodean Tim Price. Coming in strong at 12.53 p.m., the World Number One rides his Luhmühlen CCI5* winner Ascona M - and according to EquiRatings, this is the pair with the best chance of winning here.

Our last combination of the day is a real crowd favourite - but will Alex Bragg and Zagreb deliver a mark in their usual upper 20s, or will they show off the precision and panache they had when posting their PB of 23.6 to win Jardy last year? In seventh place on the season rankings so far, Alex has a chance to step onto the biggest podium of them all - but he'll need to risk it all to have it all. Don't miss their test, at 13.00 p.m. local time/12.00 p.m. BST.